The starting point for The Death of Grass was a novel by Ward Moore, Greener than You Think, in which the planet is swamped by a new variety of grass which grows everywhere and unstoppably, suffocating civilization in a blanket of green. I pondered an opposing speculation: what if a virus should emerge which attacked and eventually destroyed the Gramineae family? Grass is a comprehensive collective noun – it includes wheat, oats, maize, rye, rice. How would civilized man cope with the catastrophe of universal famine?

I was writing in the shadow of John Wyndham, a kindly man. My view was bleaker than his, and has altered little over the years. I recognize and venerate goodness in humanity but do not assume it, or expect it. To that extent at least I am a Darwinian. As Flanders and Swann carolled in one of their songs: “If God didn’t want us to eat people, why did he make us of meat?”

Grass came out modestly in England, and that would have seemed to be that. In America the efforts of my agent, Scott Meredith, produced only a demand from a small paperback house that I rewrite it in a more orthodox science-fiction mode. Scott wrote a long letter in support of this, pointing out that I had no American publisher and little prospect of finding one. Despite the growing clamour of children, I could not do it. 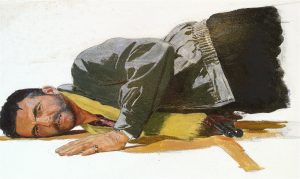 Not long after, Peter Schwed, a senior editor with the mighty Simon & Schuster, came to Europe on a buying trip, and asked Michael Joseph if he had any “story tellers” in his current list, Joseph gave him a copy of Grass. He read it on the flight back, and cabled that he would take it. His only problem was the title. The Death of Grass sounded like something out of a gardening catalogue: would No Blade of Grass be OK?

Scott Meredith had his faults but was great for running with the ball. He sold it to the Saturday Evening Post, who serialized it under a banner headline, The Story that Shocked the Editors, and followed that by selling film rights to MGM.